Posted on September 12, 2011 by photostoriesadmin

From September 8 till 11 2011 the follow-up of the PhotoStories conference took place at the Minerva Art Academy in Groningen. The programme existed of several mini-workshops (on the making of a multimedia project/digital storytelling), an extended masterclass, multimedia presentations and a debate about the future of the photographer (with Kadir van Lohuizen, Arno Haijtema, Bjarke Myrthu, Caspar Sonnen and James Wellford).

Again we realised there is a lot happening in this field. Loads of development, new projects arising, debates and discussions. Therefore it can be hard for newbies to find their way. PhotoStories helps to get a relevant overview. We asked 18 multimedia experts to put a list together with their favourite multimedia productions. Check out the list here.

Posted on September 8, 2011 by photostoriesadmin

James Wellford, senior international photo editor at Newsweek magazine, just confirmed that he will participate in the PhotoStories debate on Sunday September 11. He is in Holland by invitation of Vrije Academie’s exhibition space GEMAK for the exhibition GENERATION 9/11.

The future of the photographer will be discussed during the PhotoStories closing debate. Is multimedia the (only) way to go? Will photographers find a future in the mix of photos, sound, moving images and interactivity?  Lars Boering (Dutch Photographers Federation) will lead the panel discussion. Experts Kadir van Lohuizen (Via PanAm), Bjarke Myrthu (Storyplanet), Caspar Sonnen (IDFA DocLab), James Wellford (Newsweek) and Arno Haijtema (Volkskrant) will all take part.

Posted on August 24, 2011 by photostoriesadmin

Posted on August 16, 2011 by photostoriesadmin

The PhotoStories conference, held at Nederlands Fotomuseum in Rotterdam in May 2011, will organize a follow-up during the Noorderlicht Photo Festival in Groningen (September 8 till September 11) with a debate, masterclass and mini-workshops on multimedia photography, webdocumentary and  interactive storytelling.

The Danish experts Henrik Kastenskov and Bjarke Myrthu will provide the workshops. On the last day (September 11), a debate takes place on the question whether photographers can find a future in the mix of photos, sounds, moving images and interactivity.

PhotoStories – where photography meets multimedia storytelling started in May with a three-day meeting at Nederlands Fotomuseum in Rotterdam. International producers of photography based multimedia gave lectures, including representatives of the New York Times, TIME Magazine, Magnum Photos and the winner of the first World Press Photo Prize for non-linear multimedia, Alexandre Brachet. Ten Dutch photographers participated in a three day workshop, finishing the event with a trailer for their project.

PhotoStories is organized in response to recent developments in international documentary photography. Photographers are looking for new ways to tell their stories or projects to present. That trend intersects with the search of newspapers, magazines and broadcasters for contemporary methods of reaching their readers in an effective and attractive way to provide news coverage, especially on the internet and mobile media. How can photographers expand their tools to make a story more convincing? Will still images remain the starting point of documentary photography? And what opportunities do you actually have to tell a story?

Posted on August 16, 2011 by photostoriesadmin

The Canon Female Photojournalist Award for 2011, presented by the French Association of Female Journalists (AFJ), has been awarded to Ilvy Njiokiktjien, for her proposed report on Afrikaner adolescents in South Africa. Ilvy Njiokiktjien is one of the PhotoStories masterclass participants.

Njiokiktjien’s story originated from a visit, in 2007, to a ‘defence camp’ in South Africa where adult Afrikaners were taught how to shoot a gun in case of attack. “There is a fear among some white South Africans that there’s going to be civil war when Nelson Mandela dies, but an even greater fear is the high crime rate,” Njiokiktjien told CPN. “Most know someone who’s been hijacked or shot at. They are afraid to walk in the streets and they live in compounds behind high walls.”

An increasing number of parents are sending their children to youth camps. The camps promote a separate Afrikaner identity by creating consciousness among the young Afrikaners based on their language, religion, skin colour and traditions. Njiokiktjien, and the writer and journalist Elles van Gelder, spent nine days on a camp about three hours drive north-east of Johannesburg.

Njiokiktjien said that the boys were clearly being indoctrinated. “They learn how to shoot, they do exercises, and the evenings are spent having lectures about race from the colonel who runs the camp. One such lecture was called ‘The Enemy’, which described black and mixed-race people as ‘a big threat’ to white people. There was another lecture about how bad Mandela is,” she explained. The uniforms they wear, sometimes ill-fitting, were worn by their forefathers in the battles they fought. “One boy told me that when he got his uniform there was still blood all over it.” 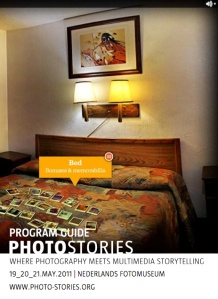 Posted on May 8, 2011 by photostoriesadmin

Saturday May 7th, the winners of the 2011 multimedia contest of World Press Photo were announced. Alexandre Brachet -one of the keynote speakers at PhotoStories- wins first prize with his interactive production Prison Valley.

The web documentary Prison Valley explores the prison industry in Cañon City, Colorado, in the US. A prison town where even those living on the outside live on the inside. A journey into what the future might hold. Prison Valley is an interactive production with photography by Philippe Brault in collaboration with author and co-director David Dufresne and produced by Alexandre Brachet and Gregory Trowbridge for Arte.

Posted on May 3, 2011 by photostoriesadmin

You can find the full program online now!